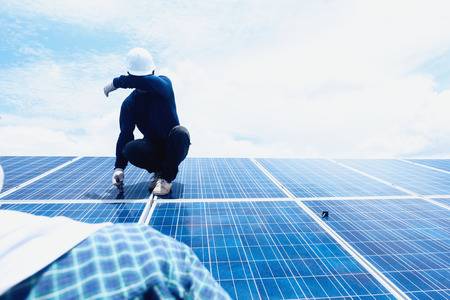 Our recent post on How to Choose a Solar Company referenced “solar cowboys” whose goal is to sell whatever they can fit on your roof, and probably sell you on a monthly payment rather than an actual cost, making the total cost significantly higher. Or selling you on the net cost after tax credits or utility rebates that are not explained and that you may or may not qualify for. Many use scab labor with no workman’s comp or liability insurance and have no internal service organization to handle warranty work. The installers are paid by the number of panels they install in a day, incentivizing speed and quantity over quality. They may not have N.C. electrical or contractor licenses, and are using subcontractor licenses. Most of these are national companies that move into a state to take advantage of state and utility incentives are in the market on a short term basis until the incentives change.

One of our recommendations was to not only get references but check the Better Business Bureau for complaints and check the BBB in the national solar companies home state. A recent example is a 4-year-old national company that recently started canvassing in North Carolina, expanding from their San Antonio, Texas market. We have seen a lot of activity in the Raleigh area and when we checked them out found this complaint on the San Antonio BBB page:

09/10/2019 I received a visit from (Company Name deleted here) despite my “No Soliciting” sign on the front door. I was listening to the sales representative (*******, accompanied by *****) from my Ring camera and heard him telling my husband that there would be construction in the area and he is following up with the local electric company’s program. In the beginning of the conversation they mislead my husband into believing that they were with the utiility. It wasn’t until I went to the door that they provided the name of the company they represented. During the visit, he gave us the name of someone along with their street name who happened to be a co-worker of my husband’s, and said that they are visiting her to give information. I scheduled an appointment, and it wasn’t until after they left that I realized he could possibly be giving my name to others in the area. I attempted to call and cancel the appointment and the only way to contact them is via voicemail. After speaking to his co-worker, my husband found that these men told her they needed to review her energy bill to resolve an issue and that is why she scheduled the appointment, unaware that they did not represent the utility. During the visit they did take a picture of my bill, which was said to be used for the appointment, which is understandable considering they will be giving a solar panel quote, however, my concern is the lack of privacy and sales technique that is being used, which causes concern with the reason for taking a picture of the bill rather than just reviewing during the appointment for quoting purposes. If that person’s phone were to be compromised, my billing name and address could be accessed by unauthorized individuals. I have my security video if needed to review this complaint.

Another national company canvassing Raleigh and surrounding communities in North Carolina that is located in Provo, Utah had 63 complaints on the Utah BBB page. Interestingly, the response to the complaint below came from the Texas company, which seems to be the umbrella company, although we have deleted both company names.

01/29/2020 We signed a contract with (Company Name deleted) 6 months ago and our solar panels are still not connected. Called the 800 number and no one calls us back until we said we wanted to cancel. The project manager named xxxx in Raleigh area called us stating we are now his point of contact and we can trust him to get everything done. That was 6 weeks ago. We have tried to call him the past 2 weeks and he would not pick up or return our phone call. The saleperson Q lied about everything from it taking 6 weeks for everything to be up and running to us getting 1 year of payments for free. Now they tell us we’d only get a year free if we give them 5 referrals, and we can’t think of one person to refer to them after the service we’ve had. They placed the panels in a different place than agreed upon, salesperson Q gave us the number to call the installers and nobody ever called us back. When they came out to connect the panels we told them before they came we needed to leave by 4pm for a flight, they said it wouldn’t be a problem, they didn’t show up till 230PM. They didn’t finish the job, set up another day to come out and never showed up. We have been paying for solar panels that don’t work plus our electricity bill. We wanted to get out of the contract and pay 15% cost to be done with them but they said once the panels are installed we are responsible for the full cost. Avoid this company at all cost.

Another complaint to this same company was that the customer signed a contract in October of 2018, with the understanding that it could take 16 weeks to install (it should not)! It took until April 2019 to install but the panels were still not connected in June when the loan payments started being due. When it was connected in July 2019 only half the panels worked.

Another customer had a system installed in November 2018 and applied for the Duke rebate in January 2019 but was put on the waitlist. That system was not interconnected until April 2019 and the solar company guaranteed the rebate if Duke did not award it. After a year on the waitlist, the customer filed a complaint with the BBB to get reimbursed.

Another customer had to file the interconnection request with Duke (after they figured out how to do it). He also had to call the inverter company to figure out how to turn it on. These are not issues the customer should have to worry about in a solar installation. It should be turnkey. That installers continue to do business this way is shocking and a stain on the industry.

Most local solar companies are in it for the long term, especially those that have already survived for ten or more years. They have an investment in the community and in their brand and local references and positive reviews. There are some questions that still need to be verified, such as certifications and accreditations, electrical and general contractor licenses (in the company name), whether the installers are employees, etc. Sadly, there are local companies that still make spurious claims, being certified to sell and install the Tesla Powerwall, being nationally accredited by NABCEP, etc.

Yes Solar Solutions is an example of a local Cary, N.C. company with over ten years experience and thousands of projects completed, national accreditations and certifications and hands-on owner management. If you are considering solar, Yes could be the right answer for you. Give us a call 919-459-4155 or contact us below.