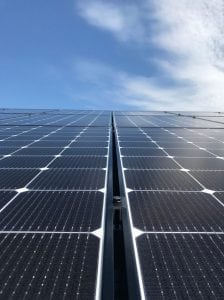 Major solar players in the state report no significant damage from Florence statewide, though some sites in flood areas have not yet been inspected.

There has been almost no damage from the storm, say major solar industry players here. And it appears that most, if not all, of the projects off line are out because the power grid — not the projects themselves — failed.

To be sure, there was not a lot of solar power produced during the storm. Chapel Hill-based Strata Solar reports that its roughly 140 projects in North Carolina put out about 25% of their normal power production over the weekend, when clouds covered most of the state and floods left many eastern projects not operating. But the solar farms themselves were largely undamaged.

Cypress Creek Renewables sees a similar pattern. Its eastern North Carolina projects stood up well to the 110 mile-per-hour winds and even the floods. The only damage it has confirmed so far is at sites where construction is still underway, says spokesman Jeff McKay. The California-based company has close 200 solar farms in North Carolina.

Of O2’s 20 projects in the state — including in hard-hit areas near the Cape Fear River and southeast of Fayetteville — “all were operating with the exception of three that were down due to local grid damage and one we voluntarily took off line on the coast,” Foodman says.

“Those four are also ready to run as soon as they are turned on by the local utility,” he adds.

The N.C. Clean Energy Business Association has asked its membership to keep it posted on how their projects were faring. “We haven’t had any real reports of damage anywhere,” says Executive Director Chris Carmody, though he acknowledges that there are solar farms that operators have not been able to inspect yet because of flooding.

Brian O’Hara, Strata’s senior vice president for strategy, said Tuesday only one of Strata’s roughly 140 solar farms in North Carolina has been confirmed as sustaining damage from the wind and storm. That was the five-megawatt Wilson Farm in Wilson County.

“We believe a tornado touched down on that site,” he says. But though there is some damage, he says the site is operational.

About half of Strata’s farms were knocked off line during the storm. By Wednesday, Strata had been able to inspect 20 of them. Almost all of them, he says, were tripped off because the utility grid failed in their area. A few had been shut down by Strata itself as a precaution in advance of the storm, as they were believed to be in Florence’s direct path.

He expects most, if not all, of the remaining projects will prove to be similarly resilient. “We build them to sustain far greater winds than what we saw in Florence,” he says.

Strata, like other solar operators, will not put a project back in service until it has sent a crew to the farm to make sure there is no damage and that it is safe to operate.

Duke Energy Progress operates three solar farms in eastern North Carolina — the 13-megawatt Camp Lejeune Solar in Onslow County, the 23-megawatt Fayetteville Solar in Cumberland County and the 60-megawatt Warsaw Solar in Duplin County. Duke spokesman Randy Wheeless says all three were shut off as a precaution in advance of Florence’ landfall Friday morning as a Category 1 hurricane. They remained off line Wednesday, as Duke awaited an opportunity to inspect them.

Wheeless says Duke Energy Carolinas’ 60-megawatt Monroe Solar in Union County sustained damage to about a dozen of the 600,000 panels at the farm as Florence, downgraded to a tropical storm, moved west. But the site was operational.

Duke Energy Renewables, a commercial subsidiary of Charlotte-based Duke Energy Corp. (NYSE: DUK), operates 23 solar projects in eastern North Carolina totaling 295 megawatts. Spokeswoman Tammie McGee notes that all of them are in northeastern North Carolina, outside of the storm’s path. All were on line Wednesday and none sustained damage.

Carmody says that, for all the concerns about the resiliency of solar power projects, they appear to have fared as well or better than traditional power plants. He notes that Duke’s 1,870-megawatt Brunswick Nuclear Plant near Southport was shut down last week as a precaution in advance of Florence. That plant remained off line as of this morning.