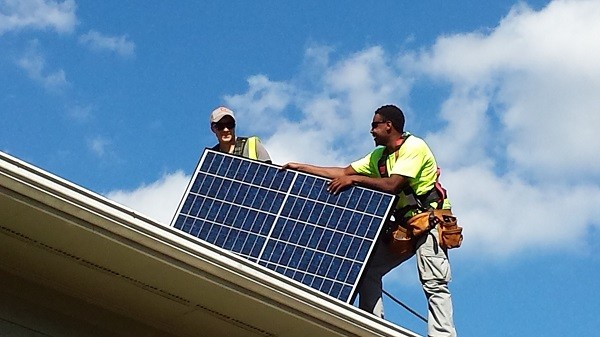 A Promise of Renewable Energy

It is promising to hear about and see the actions of cities large and small make a shift towards renewable energy. There is an apparent groundswell of acceptance for renewable energy at a local level, while environmental efforts and policy are navigating obstacles at a state and federal level.  For example, in December 2016, Boone, NC passed a historic resolution to get to 100% Clean Energy use.  With this resolution, it became the first town in the country to officially demand the US completely ditch fossil fuels.

On the other hand, it is not hard to find examples of efforts to reverse environmental protection with attacks on scientific truths in the name of business and jobs.  It seems that every day there is more news about the current administration’s cuts in climate change research.  Just yesterday, news came out about an executive order that will change the US approach to climate change.

The Truth:  Renewable energy is good for the economy/job growth and energy independence.  Climate Change is real and everything must be done to fight shifts in temperatures, rising sea levels  and the devastating ramifications of climate change we are seeing around the world.

This post is going to be a start to a series highlighting  towns and cities, large and small, making the move to Renewable Energy. Leading the way. Setting an example.  Just as individuals have started the movement, there is opportunity now to take it to the next level. Yes Solar Solutions has installed over 700 custom solar systems. Each customer is a leader. For any of the various reasons our customers went solar or are going solar, they are setting the example and demanding, at the most local level, renewable energy.  There is a Greek proverb that is echoing around climate change conversations, and reflects the value of leadership.  A society grows great when old men plant trees whose shade they know they shall never sit in.

Madison is the first city in Wisconsin to promise to use 100 percent renewable energy.   Madison is the home of the University of Wisconsin.  It is also the capital city of the state, a city that has made a commitment  to get all of its energy from renewable sources and achieving net-zero greenhouse emissions.  With the commitment, Madison not only joins 23 other cities in the US, but also becomes a leader and sets an example for the rest of the country. The Sierra Club reports Madison is the largest city in the Midwest to set this community-wide goal.

Local NBC 15 reports city staff will start to develop target dates for reaching the goal. $250,000 has been set aside to hire a consultant to help create the plan by January 18, 2018. The next step is to issue an RFP (Request for proposal) for implementation.

We are confident about renewable energy’s future.  Despite the current administration’s overwhelming denial of climate change and the lack of action at the state and federal level. And we are inspired by these cities and the people around the country. We are inspired by our customers here in NC who are speaking with actions and supporting the solar industry and renewable energy in general.

In the next few weeks we will talk about other cities making moves toward 100% renewable energy, like Greensburg, Kansas, San Diego, California, Salt Lake City, Utah and Georgetown, Texas.

We can develop a customized energy plan and design a solar energy system for your energy needs and goals. Give us a call to start the conversation, 919-459-4155 or fill out the simple form below.